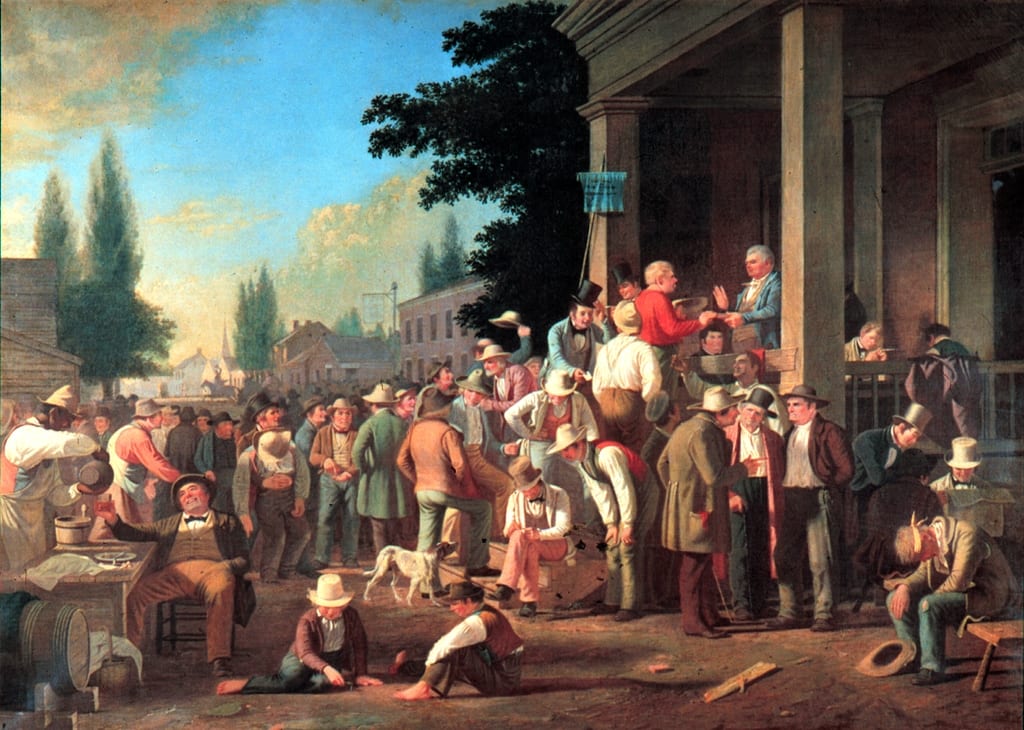 Agreeably to a circular letter which originated in the county of Cumberland, inviting to a conference such of the citizens of this state who conceive that a revision of the federal system, lately proposed for the government of these United States, is necessary, — a number of gentlemen from the city of Philadelphia, and counties of Philadelphia, Bucks, Chester, Lancaster, Cumberland, Berks, Northumberland, Bedford, Fayette, Washington, Franklin, Dauphin, and Huntingdon, assembled at this place for the said purpose, viz.: —

After free discussion, and mature deliberation, had upon the subject before them, the following resolutions and propositions were adopted —

The ratification of the federal Constitution having formed a new era in the American world, highly interesting to all the citizens of the United States, it is not less the duty than the privilege of every citizen to examine with attention the principles and probable effect of a system on which the happiness or misery of the present as well as future generations so much depends. In the course of such examination, many of the good citizens of the state of Pennsylvania have found their apprehensions excited that the Constitution, in its present form, contains in it some principles which may be perverted to purposes injurious to the rights of free citizens, and some ambiguities which may probably lead to contentions incompatible with order and good government. In order to remedy these inconveniences, and to avert the apprehended dangers, it has been thought expedient that delegates, chosen by those who wish for early amendments in the said Constitution, should meet together for the purpose of deliberating on the subject, and uniting in some constitutional plan for obtaining the amendments which they may deem necessary.

We, the conferees, assembled for the purpose aforesaid, agree in opinion, —

That a federal government, only, can preserve the liberties and secure the happiness of the inhabitants of a country so extensive as these United States; and experience having taught us that the ties of our union, under the Articles of Confederation, were so weak as to deprive us of some of the greatest advantages we had a right to expect from it, we are fully convinced that a more efficient government is indispensably necessary. But although the Constitution proposed for the United States is likely to obviate most of the inconveniences we labored under, yet several parts of it appear so exceptionable to us, that we are clearly of opinion considerable amendments are essentially necessary. In full confidence, however, of obtaining a revision of such exceptionable parts by general convention, and from a desire to harmonize with our fellow-citizens, we are induced to acquiesce in the organization of the said Constitution.

We are sensible that a large number of the citizens both of this and the other states, who give their assent to its being carried into execution previous to any amendments, were actuated more by fear of the dangers that might arise from delays, than by a conviction of its being perfect; we therefore hope they will concur with us in pursuing every peaceable method of obtaining a speedy revision of the Constitution in the mode therein provided; and, when we reflect on the present circumstances of the Union, we can entertain no doubt that motives of conciliation, and the dictates of policy and prudence, will conspire to induce every man of true federal principles to give his support to a measure which is not only calculated to recommend the new Constitution to the approbation and support of every class of citizens, but even necessary to prevent the total defection of some members of the Union.

Strongly impressed with those sentiments, we have agreed to the following resolutions: —

I. Resolved, That it be recommended to the people of this state to acquiesce in the organization of the said government; but, although we thus accord in its organization, we by no means lose sight of the grand object of obtaining very considerable amendments and alterations, which we consider essential to preserve the peace and harmony of the Union, and those invaluable privileges for which so much blood and treasure have been recently expended.

II. Resolved, That it is necessary to obtain a speedy revision of said Constitution, by a general convention.

III. Resolved, That, in order to effect this desirable end, a petition be presented to the legislature of this state, requesting that honorable body to take the earliest opportunity to make application, for that purpose, to the new Congress.

The petition proposed is as follows: —

To the Honorable the Representatives of the Freemen of the Commonwealth of Pennsylvania, in General Assembly met:

The petition and representation of the subscribers humbly show —

That your petitioners possess sentiments completely federal; being convinced that a confederacy of republican states, and no other, can secure political liberty, happiness, and safety, throughout a territory so extended as the United States of America. They are well apprized of the necessity of devolving extensive powers to Congress, and of vesting the supreme legislature with every power and resource of a general nature; and consequently they acquiesce in the general system of government framed by the late federal Convention, — in full confidence, however, that the same will be revised without delay; for, however worthy of approbation the general principles and outlines of the system may be, your petitioners conceive that amendments in some parts of the plan are essential not only to the preservation of such rights and privileges as ought to be reserved in the respective states, and in the citizens thereof, but to the fair and unembarrassed operation of the government in its various departments. And as provision is made, in the Constitution itself, for the making such amendments as may be deemed necessary, and your petitioners are desirous of obtaining the amendments which occur to them as more immediately desirable and necessary, in the mode admitted by such provision, —

They pray, that your honorable house, as the representatives of the people in this commonwealth, will, in the course of your present session, take such measures as you, in your wisdom, shall deem most effectual and proper to obtain a revision and amendment of the Constitution of the United States, in such parts, and in such manner, as have been or shall be pointed out by the conventions or assemblies of the respective states and that such revision be by a general convention of representatives from the several states in the Union.

Your petitioners consider the amendments pointed out in the propositions hereunto subjoined as essentially necessary; and as such they suggest them to your notice, submitting to your wisdom the order in which they shall be presented to the consideration of the United States.

The amendments proposed are as follows, viz.: —

I. That Congress shall not exercise any powers whatever, but such as are expressly given to that body by the Constitution of the United States: nor shall any authority, power, or jurisdiction, be assumed or exercised by the executive or judiciary departments of the Union, under color or pretence of construction or fiction; but all the rights of sovereignty, which are not by the said Constitution expressly and plainly vested in the Congress, shall be deemed to remain with, and shall be exercised by, the several states in the Union, according to their respective constitutions; and that every reserve of the rights of individuals, made by the several constitutions of the states in the Union, to the citizens and inhabitants of each state respectively, shall remain inviolate, except so far as they are expressly and manifestly yielded or narrowed by the national Constitution.

Section 3. III. That senators, though chosen for six years, shall be liable to be recalled, or superseded by other appointments, by the respective legislatures of the states, at any time.

Section 4. IV. That Congress shall not have power to make or alter regulations concerning the time, place, and manner of electing senators and representatives, except in case of neglect or refusal by the state to make regulations for the purpose; and then only for such time as such neglect or refusal shall continue.

Section 8. V. That when Congress shall require supplies, which are to be raised by direct taxes, they shall demand from the several states their respective quotas thereof, giving a reasonable time to each state to procure and pay the same; and if any state shall refuse, neglect, or omit to raise and pay the same within such limited time, then Congress shall have power to assess, levy, and collect the quota of such state, together with interest for the same, from the time of such delinquency, upon the inhabitants and estates therein, in such manner as they shall by law direct; provided that no poll tax be imposed.

Section 8. VI. That no standing army of regular troops shall be raised or kept up in time of peace, without the consent of two thirds of both houses in Congress.

Section 8. VII. That the clause respecting the exclusive legislation over a district not exceeding ten miles square be qualified by a proviso that such right of legislation extend only to such regulations as respect the police and good order thereof.

Section 8. VIII. That each state, respectively, shall have power to provide for organizing, arming, and disciplining the militia thereof, whensoever Congress shall omit or neglect to provide for the same. That the militia shall not be subject to martial law, but when in actual service, in the time of war, invasion, or rebellion; and when not in the actual service of the United States, shall be subject to such fines, penalties, and punishments, only, as shall be directed or inflicted by the laws of its own state: nor shall the militia of any state be continued in actual service longer than two months, under any call of Congress, without the consent of the legislature of such state, or, in their recess, the executive authority thereof.

Section 9. IX. That the clause respecting vessels bound to or from any one of the states be explained.

Article 3, section 1. X. That Congress establish no other court than the Supreme Court, except such as shall be necessary for determining causes of admiralty jurisdiction.

Section 2, paragraph 2. XI. That a proviso be added at the end of the second clause of the second section of the third article, to the following effect, viz.: Provided, that such appellate jurisdiction, in all cases of common-law cognizance, be by a writ of error, and confined to matters of law only; and that no such writ of error shall be admitted, except in revenue cases, unless the matter in controversy exceed the value of three thousand dollars.

Article 6, paragraph 2. XII. That to article 6, clause 2, be added the following proviso, viz.: Provided always that no treaty, which shall hereafter be made, shall be deemed or construed to alter or affect any law of the United States, or of any particular state, until such treaty shall have been laid before and assented to by the House of Representatives in Congress.

Resolved, That the foregoing proceedings be committed to the chairman for publication.