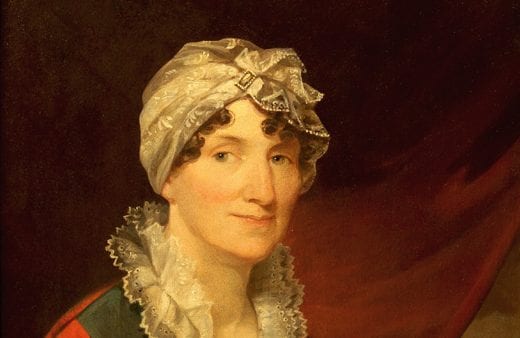 I made the same Mistake my dearest Girl respecting the post that You did and went myself to the Stage House, but could not find an Opportunity to transmit a letter. I am happy to hear that you & our dear infant are well, God grant that You may continue so: I was really uneasy at not hearing from you friday or Saturday. I was at Mrs.Bonds on Sunday evening where I found Mrs. Cadwalder. They interrogated me on my not calling oftener on them and were very kind in every respect particularly in their inquires about you and the baby. I perfectly agree with you in your observations on the conduct of certain persons. I think their friends, was it known would be much displeased with them: I mentioned in my last that I had received my little friend and Companion, who presents herself to my view every morning and evening regularly for a kiss.

We cannot fortell or forsee the Decrees of Omnipotence respecting our existence, that is a matter which he wisely conceals from mortals: but I do not expect a long life, my constitution appears not to be formed for it, and such as it is, constant attention of one kind or another pray on it: but if anything makes like in the least desirable it is you, mu dearest girl and our source of evils. Detached from your comforts, life to me Would be a source of evils. When troubles occur now, I reflect that they are of no consequence, compared with the happiness resulting from my little family. This opens a prospect which satisfies every Desire. Your pappa is in the Instance you mention too sudden; he desired me to see Hamilton and Doctor Johnson and I saw them both. Hamilton was disposed to all the alterations proposed and made several: but as some required an alteration of the State of Facts in consequence of your papa’s minutes, Hamilton said he would have that done in New York as soon as he arrived, first consulting your pappa and seeing him with Harrison. He thot that as Harrison drew the Bill, delicacy required such a mode of proceeding, and indeed I should have conducted in the same manner had the case been my own. I think it would be best for your pappa to meet them, and after they have made the alteration, I will consult Doctor Johnson, if he will send the Bill and Will. I see their design of procrastination, but these things have their course, and cannot be too much hastened. Who marries Miss Sukey Van horn? Do I know him? I am as such of being here as You can conceive. Most of the Time I am at Home or in convention. I do think in a Week I am ten hours any where else. We meet now at ten and sit til four: but entre nous, I do not expect to give my voice to the measures. Tell your mamma and the young ladies I am surprized to hear such Accounts of them: what is the matter with your brother. Kellus appears to be very industrious. He lived with Stevenson, his wife’s Mother was named Fischer, but is now married to John Cuyler who as well as Stevenson live in the Bowery. Is Mr. Osgood’s Man really sick? I desired your pappa to request You to take care of him. I would have you hire a coach when you want one. Major Butler informs me of Mrs. Butlers arrival at Newport in 48 hours: she desires particularly her compliments and mentioned our letters as acts of friendship and politeness. Inclosed is the letter from our lovely Friend at Dublin and the answer which you will seal and send to her her: also your brother Roberts Letter. Adieu my dearest Life, kiss heartily our dear little poppet for me, and with my regards to your mamma and all the family be assured I am ever your sincere and affectionate