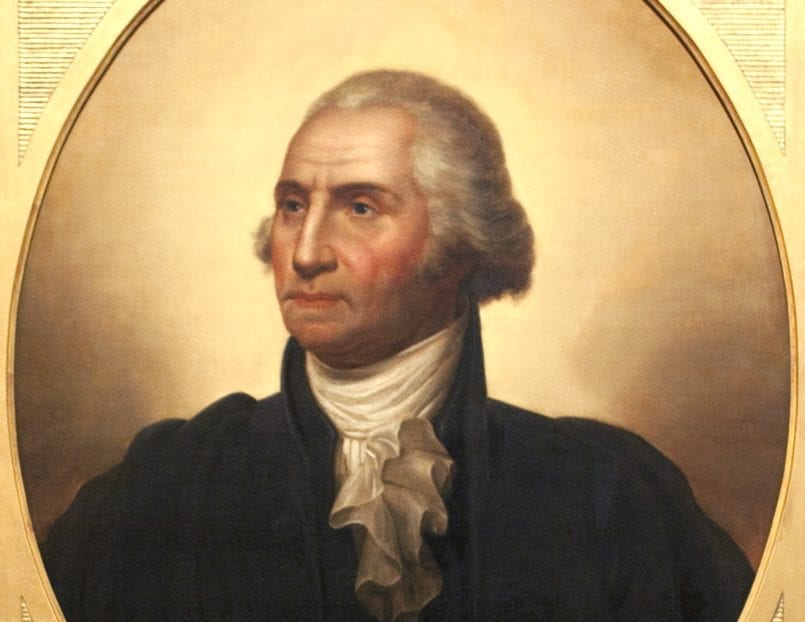 I was happy to find by the letter of Aug. 1. 1786. which you did me the honour to write me, that the modern dress for your statue would meet your approbation. I found it strongly the sentiment of West, Copeley, Trumbul and Brown in London, after which it would be ridiculous to add that it was my own. I think a modern in an antique dress as just an object of ridicule as an Hercules or Marius with a periwig and chapeau bras.

I remember having written to you while Congress sat at Annapolis on the water communications between ours and the Western country, and to have mentioned particularly the information I had received of the plain face of the country between the sources of Big beaver and Cayohoga, which made me hope that a canal of no great expence might unite the navigations of L. Erie and the Ohio. You must since have had occasion of getting better information on this subject and, if you have, you would oblige me by a communication of it. I consider this canal, if practicable, as a very important work.

I remain in hopes of great and good effects from the decisions of the assembly over which you are presiding. To make our states one as to all foreign concerns, preserve them several as to all merely domestic, to give to the federal head some peaceable mode of enforcing their just authority, to organize that head into Legislative, Executive and Judiciary departments are great desiderata in our federal constitution. Yet with all its defects, and with all those of our particular governments, the inconveniencies resulting from them are so light in comparison with those existing in every other government on earth, that our citizens may certainly be considered as in the happiest political situation which exists.—The assemblée des Notables has been productive of much good in this country. The reformation of some of the most oppressive laws has taken place and is taking place. The allotment of the state into subordinate governments, the administration of which is committed to persons chosen by the people, will work in time a very beneficial change in their constitution. The expence of the trappings of monarchy too are lightening. Many of the useless officers, high and low, of the king, queen, and princes are struck off. Notwithstanding all this the discovery of the abominable abuses of public money by the late comptroller general, some new expences of the court, not of a peice with the projects of reformation, and the imposition of new taxes, have in the course of a few weeks raised a spirit of discontent in this nation, so great and so general, as to threaten serious consequences. The Parliaments in general, and particularly that of Paris put themselves at the head of this effervescence, and direct it’s object to the calling the states general, who have not been assembled since 1614. The object is to fix a constitution, and to limit expences. The king has been obliged to hold a bed of justice to enforce the registering the new taxes: the parliament on their side propose to issue a prohibition against their execution. Very possibly this may bring on their exile. The mild and patriotic character of the new ministry is the principal dependance against the extremity.

The turn which the affairs of Europe will take is not yet decided. The Emperor, on his return to Vienna, disavowed the retrocessions made by his governors general in the low countries. He at the same time called for deputies to consult on their affairs. This, which would have been the sole measure of a wise sovereign, was spoiled by contrary indications resulting from his Thrasonic character. The people at first refused to send deputies. At last however they sent them without powers, and go on arming. I think there is little doubt but the Emperor will avail himself of these deputies to tread back his steps. He will do this the rather that he may be in readiness to take part in the war likely to be produced by the Dutch differences. The kings of England and Prussia were abetting the cause of the Stadholder, France that of the Patriots: but negotiations were going on to settle them amicably, when all of a sudden, the Princess of Orange, undertaking a secret journey to the Hague to incite an insurrection of the people there, is stopped on the road, writes an inflammatory letter to her brother, he without consulting England, or even his own council, or any thing else but his own pride, orders 20,000 men to march into the neighborhood of Holland. This has been followed by the sailing of the English squadron somewhere Westwardly, and that will be followed by a squadron from Brest, and an army to the confines of Holland from this country. Appearances therefore are within a few days past more like war than they had been. Still however the negotiations are going on, and the finances both of France and England are so notoriously incompetent to war, that the arrest of hostile movements and an amicable adjustment are not yet altogether despaired of. A war, wherein France, Holland and England should be parties, seems primâ facie to promise much advantage to us. But in the first place no war can be safe for us which threatens France with an unfavourable issue. And in the next, it will probably embark us again into the ocean of speculation, engage us to overtrade ourselves, convert us into Sea-rovers under French and Dutch colours, divert us from Agriculture which is our wisest pursuit, because it will in the end contribute most to real wealth, good morals and happiness. The wealth acquired by speculation and plunder is fugacious in it’s nature and fills society with the spirit of gambling. The moderate and sure income of husbandry begets permanent improvement, quiet life, and orderly conduct both public and private. We have no occasion for more commerce than to take off our superfluous produce, and tho people complain that some restrictions prevent this, yet the price of articles with us in general shew the contrary. Tobacco indeed is low, not because we cannot carry it where we please, but because we make more than the consumption requires. Upon the whole I think peace advantageous to us, necessary for Europe, and desireable for humanity. A few days will decide probably whether all these considerations are to give way to the bad passions of kings and those who would be kings.

I have the honour to be with very sincere esteem and respect dear Sir Your most obedient & most humble servant,

P.S. Aug. 15. The Parliament is exiled to Troyes this morning.