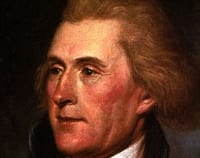 The day fixed for the meeting of the Convention was the 14th.ult: on the 25th. and not before seven States were assembled. General Washington was placed una voce in the chair. The Secretaryship was given to Major Jackson. The members present are from Massachusetts Mr. Gerry, Mr. Gorum, Mr. King, Mr. Strong. From Connecticut Mr. Sherman Doct. S. Johnson, Mr. Elseworth. From N. York Judge Yates, Mr. Lansing, Col. Hamilton. N. Jersey, Governour Livingston, Judge Brearly, Mr. Patterson, Attorney Genl. (Mr. Houston & Mr. Clarke are absent members.) From Pennsylvania Doctr. Franklyn, Mr. Morris, Mr. Wilson, Mr. Fitzimmons, Mr. G. Clymer. Genl. Mifflin, Mr. Governeur Morris, Mr. Ingersoll. From Delaware Mr. Jno. Dickenson, Mr. Reed, Mr. Bedford, Mr Broom, Mr. Bassett. From Maryland Majr. Jenifer only. Mr. McHenry, Mr. Danl. Carrol, Mr. Jno. Mercer, Mr. Luther Martin are absent members. The three last have supplied the resignations of Mr. Stone, Mr. Carrol of Carolton, and Mr. T. Johnson as I have understood the case. From Virginia Genl. Washington, Governor Randolph, Mr. Blair, Col. Mason, Docr. McClurg, J Madison. — Mr. Wythe left us yesterday, being called home by the serious declension of his lady’s health. From N. Carolina, Col. Martin late Governor, Docr. Williamson, Mr. Spaight, Col. Davy. — Col. Blount is another member but is detained by indisposition at N. York. From S. Carolina Mr. John Rutlidge, General Pinkney, Mr. Charles Pinkney, Majr. Pierce Butler. Mr. Laurens is in the Commission from that State, but will be kept away by the want of health. From Georgia Col. Few, Majr. Pierce, formerly of Williamsbg. & aid to Genl. Greene, Mr. Houston. —Mr. Baldwin will be added to them in a few days. Walton and Pendleton are also in the deputation. —N. Hamshire has appointed Deputies but they are not expected; the State treasury being empty it is said, and a substitution of private resorces being inconvenient or impracticable. I mention this circumstance to take off the appearance of backwardness, which that State is not in the least chargeable with, if we are rightly informed of her disposition. Rhode Island has not yet acceded to the measure As their Legislature meet very frequently, and can at any time be got together in a week, it is possible that caprice if no other motive may yet produce a unanimity of the States in this experiment.

In furnishing you with this list of names, I have exhausted all the means which I can make use of for gratifying your curiosity, It was thought expedient in order to secure unbiassed discussion within doors, and to prevent misconceptions & misconstructions without, to establish some rules of caution which will for no short time restrain even a confidential communication of our proceedings. The names of the members will satisfy you that the States have heen serious in this business. The attendance of Genl, Washington is a proof of the light in which he regards it. The whole Community is big with expectation. And there can be no doubt but that the result will in some way or other have a powerful effect on our destiny.