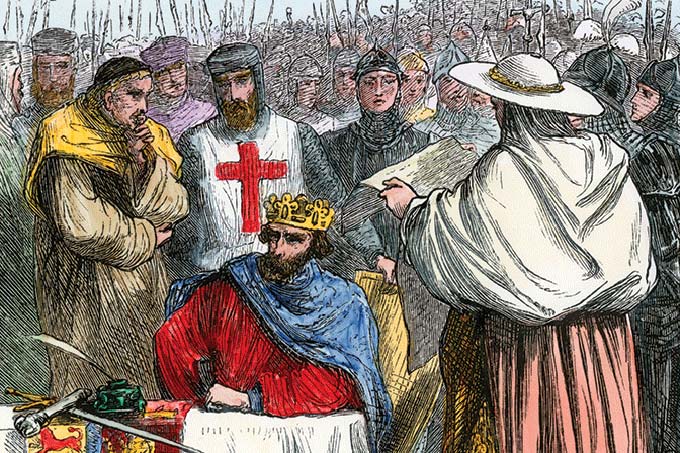 I have chosen three English documents which are regularly relied on to make the case that there is a direct and strong link between the English inheritance and the U.S. Bill of Rights. Also reproduced are six colonial sources in an attempt to capture the emergence of a separate American Mind, albeit still a colonial mind. This is not to suggest that these are the only such sources; however, I believe that these six documents best tell the story I am attempting to convey.

What is indisputable, and also surprising in the opposite direction, is the even stronger relationship between the U.S. Bill of Rights and the Colonial past. 18 of 26, or just under 70%, can be traced directly to the Colonial tradition. And 15 of 26, or close to 60%, come from one source alone: the Massachusetts Body of Liberties of 1641!

Even more importantly, there is a distinctively qualitative difference in the emerging Colonial American version of rights. Unique is the emergence of the individual right of religious worship, the political rights of press and assembly, and what became the Sixth Amendment in the U.S Bill of Rights dealing with accusation, confrontation, and counsel. These are home grown.

Despite the presence of words such as “scutage,” and “wapenstakes,” which locate the Great Charter squarely in the feudal era, the spirit of the document speaks to subsequent generations. The Magna Carta is more than a practical document specifically designed to solve feudal difficulties. True, King John was forced at gun point to recognize the existence of the traditional rights of the barons, but there are a set of principles which inform the sixty-three chaptered document signed in Runnymede in 1215 and reaffirmed by subsequent British monarchs. The principles extend beyond the often recognized origin of the no taxation without representation doctrine in chapter 12 and the due process clause of chapter 39. The concepts of trial by jury and no cruel punishments are present in chapter 21; and the confrontation clause of the Sixth Amendment is anticipated in chapters 38, 40, and 44. But the most important contribution of the Magna Carta is the claim that there is a fundamental set of principles which even the King must respect. Above all else, Magna Carta makes the case that the people have a “right” to expect “reasonable” conduct by the monarch. These rights are to be secured by the principle of representation outlined in the longest chapter.

The English Petition of Right, 1628

The 1628 Petition of Right is the second of the three British documents that provided a strong common law component to the development of the American Bill of Rights. The authors of the statute consciously invoke the memory of the rule of law heritage of the Magna Carta: they insist that the monarchy honor and respect rights to which Englishmen have been accustomed for centuries. In the thirteenth century, the nobles petitioned the King to abandon his arbitrary and tyrannical policies; four centuries later, it was the commoners who petitioned the King to adhere to the principles of reasonable government bequeathed by the English tradition. Under the leadership of Sir Edward Coke, a legal scholar-turned-practical politician, Parliament petitioned Charles I, son of the recently deceased King James I, to uphold the traditional rights of Englishmen. Among the customary “divers rights and liberties of the subjects” listed were no taxation without consent, “due process of law,” the right to habeas corpus, no quartering of troops, the respect for private property, and the imposition of no cruel punishment.

To be sure, King Charles did not consider himself bound by the petition; in fact he disregarded it. Nevertheless, it would be wrong to underestimate the importance of the document. On the one hand, it reaffirmed the right to petition as a fundamental right that can be invoked legitimately against a monarch who has strayed from traditional principles. Moreover, Coke’s argument still had considerable appeal over one hundred years later on the other side of the Atlantic. During the 1760s, the American colonists articulated their grievances against King George in terms reminiscent of Coke’s petition to uphold the rights of Englishmen. On the other hand, King Charles’s rejection of the appeal shows the inherent limitations of the right to petition.

The Massachusetts Body of Liberties, 1641

The Massachusetts Body of Liberties, adopted in December 1641, was the first attempt in Massachusetts to restrain the power of the elected representatives by an appeal to a document that lists the rights, and duties, of the people. The document, drafted and debated over several years, combines the American covenanting tradition with an appeal to the common law tradition. Containing ninety-eight sections, it covers the rules concerning judicial proceedings (sections 18-57); “liberties more peculiarly concerning the free man” (sections 58-78); and the rights of women (79-80), children (sections 81-84), servants (85-88), foreigners (89-91), and animals (92-93). Section 94 provides biblical justification supporting the death penalty in twelve cases, and Section 95 contains eleven liberties given by “the Lord Jesus to the Churches.” The most enduring part of the Body of Liberties are the preamble and the first seventeen sections, which contain the essential rights of the common law tradition. Of particular importance are references to what by now were traditional on the American side of the Atlantic: the equal treatment of all persons under laws passed by the legislature, just compensation for property taken for public use, the right to petition government for redress of grievances, the right to trial by jury, the right to travel, and lastly, the right to trade.

The “great charter” of New Jersey, 1677, done in the name of the “Proprietors, Freeholders, and Inhabitants of the said Province,” was modeled on the Rhode Island Charter. The New Jersey framers also attempted to secure the potentially conflicting goals of local self government and adherence to enduring principles. The first twelve chapters of the forty-four chapter charter concern the selection and duties of Commissioners, the encouragement of land ownership, and provision for the construction of public highways. Chapters 24-44 cover relations with the Indians, wills and testaments, and taxes and assessments. The critical middle eleven sections cover the “common law or fundamental rights and priviledges of West New Jersey.” Among the rights to be protected are the rights to the free exercise of religion, due process of law, trial by jury, and to confront witnesses in an open court of law. Finally, the government is obligated to ensure that every person shall “be free from oppression and slavery.”

The Pennsylvania Frame of Government, 1681

In 1681, King Charles II granted Quaker William Penn ownership of the “Province of Pennsilvania.” The 1682 Frame of Government was designed “for the good Government thereof” and included a “grant” of “divers Liberties, Franchises and Properties.” This document is unique to the seventeenth-century American experience; the authorizing, or granting, agent was neither the English monarch nor the people. Penn, as lone founder, “did grant and confirm unto” the inhabitants certain individual rights. And yet, scholars are surely correct to note that this document ranks among “the most influential of the Colonial documents protecting individual rights,” against the abuse of governmental powers.

There is both a constitutional and legalistic tone to the document. First, a preamble announcing the purposes of government and declaring that the rule of “good laws,” supported by a wise and virtuous people, is to be chosen over “the rule of one, few, and many” magistrates in a country inhabited by “a loose and depraved people.” This is followed by a “Frame,” containing twenty-four sections guaranteeing the right of participation and outlining the powers and responsibilities of government officials. Finally, there is an extensive itemization of civil and criminal rights and expectations. The list not only includes the familiar common law right to fair trial by a jury of one’s peers, but also detailed provisions for the careful handling of such specific matters as court fees, fines, and documents.

The document also addresses the American religious paradox. On the one hand, Section XXXV declares that inhabitants “shall, in no ways, be molested or prejudiced for their religious persuasion, or practice, in matters of faith and worship, nor shall they be compelled, at any time, to frequent or maintain any religious worship, place or ministry whatever.” On the other hand, specific provision is made in Section XXXVI for the observance of “the Lord’s day,” and punishments are indicated in Section XXXVII for “offences against God.” There is a political, as well as a theological, reason for itemizing twelve offences of “uncleanness,” eight offences of “violence,” and eleven offences productive of “rudeness, cruelty, looseness, and irreligion.” These thirty-one “offences against God” are examples of the “wildness and looseness of the people” that, in turn, “provoke the indignation of God against a country.”

The third British contribution to the development of the American Bill of Rights is the 1689 English Bill of Rights. The “Convention Parliament” of 1689 declared an end to the three-year reign of James II, formerly the Duke of York, and passed an Act to secure “the Kingdom from Popery and Arbitrary Power.” To that end, Parliament listed twelve indictments against him and issued a declaration of the rights and liberties of the subject. Never again, declared the agreement between the Parliament and the newly enthroned monarchs — King William of Orange and Queen Mary, daughter of dethroned King James II – must the “Religion, Laws, and Liberties” of the Realm “be in danger of being subverted.” To that end, several ancient rights of Englishmen are reaffirmed: the right to petition government for the redress of grievances, the expectation that governmental policy shall confirm to the rule of law, that standing armies in peace time without the consent of Parliament is illegal, and “that Excessive Bail ought not to be required, nor Excessive Fines imposed; nor cruel and unusual Punishments inflicted.” Parliament also declared that henceforth it was going to be a major political actor; the representatives of the people shall be guaranteed the freedom of speech and debate and that there were to be frequently held elections. Included in this was the right of the people to bear arms. Not included, however, in the declaration of rights that Englishmen have are the right to the free exercise of religion and the right to choose their form of government.

The Pennsylvania Charter of Privileges, 1701

A final document worthy of consideration is the 1701 Pennsylvania Charter of Privileges. This was the last and, perhaps, “the most famous of all colonial constitutions.” This charter, also written by William Penn, replaced the original 1682 document as the fundamental law of the colony. (The necessary “Six parts of Seven of the Freemen” requested an amendment to the 1682 Frame of Government.) The new charter, which remained in force for the next one hundred and seventy five years, was designed to be more “suitable to the present Circumstances of the Inhabitants.” The most important structural changes are the provisions for annual county-based elections to a unicameral General Assembly and an enhanced political role for the legislature. Enhanced protection is also given to freedom of conscience. For example, the free exercise of religion clause is placed first, and is unamendable, and religious qualification for holding office is limited to belief in Jesus Christ. Moreover the “offences against God” section of the 1682 charter are absent. Finally, Penn included the right of criminals to have “the same Privileges of Witness and Council as their prosecutors.”