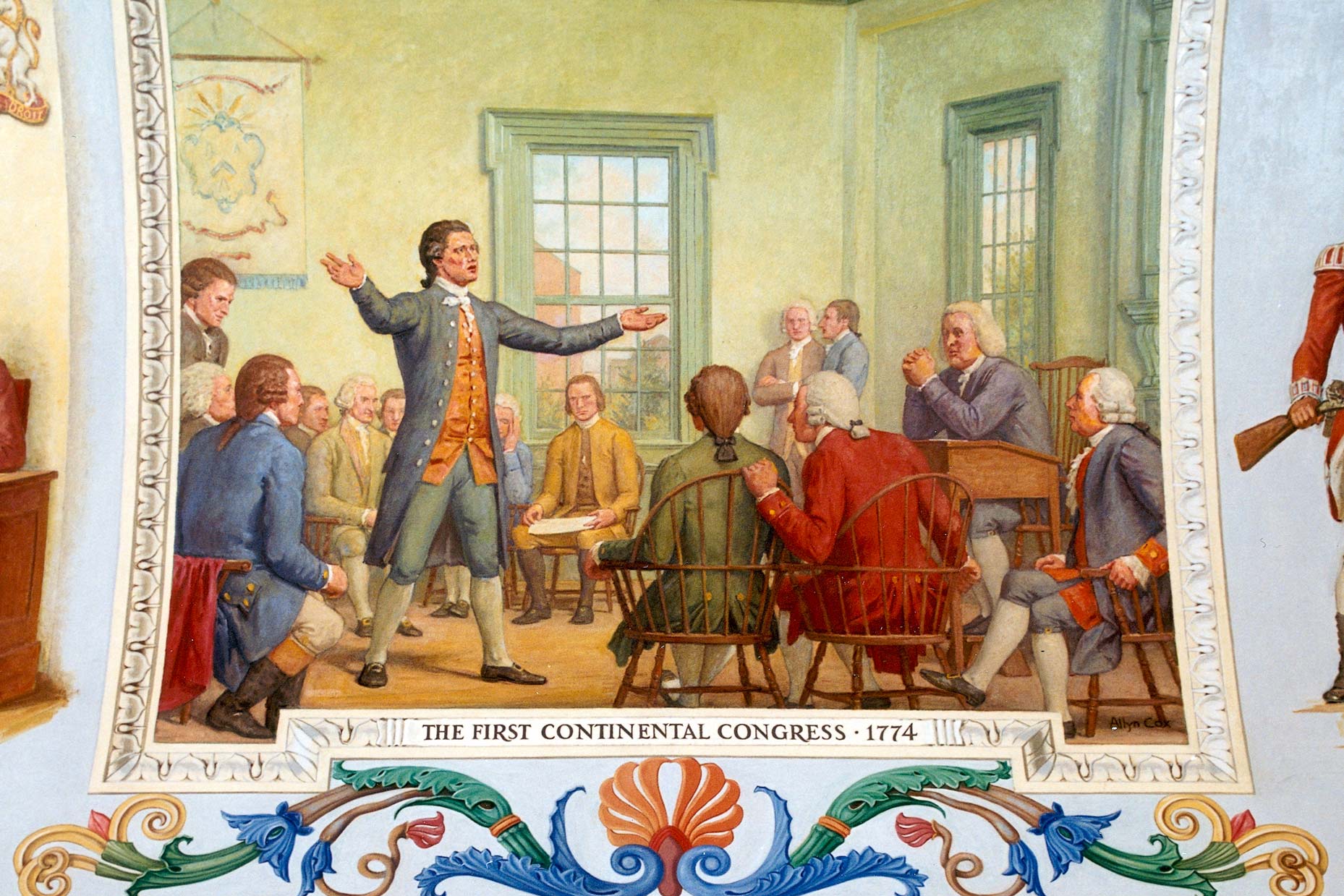 The First Continental Congress convened in Philadelphia on September 5 in response to the Intolerable Acts. On October 20, the Congress in turn responded to King George, and in the last week of October, to the inhabitants of Great Britain, and the people of the United Colonies. It passed the Articles of Association which provided a timeline for an importation and exportation embargo with Great Britain. The hope was that the threat of an economic embargo would encourage King George to address the colonial grievances and thus produce an amicable reconciliation.

We have divided Act I into two Scenes

The Journal of Congress lists 45 delegates present on September 5, 1774, which we list in the chart below. (Richard Henry Lee actually arrived on September 6.) We have added other delegates as they arrived.

The following excerpt from a letter dated October 10 from the three Connecticut delegates addressed to Governor Jonathan Trumbull is a good summary of what has took place between September 1 and the first two weeks of October. The Suffolk Resolves were an important element in the conversations seeking reconciliation or independence.

“The mode of Voting in this Congress was First resolved upon, which was that each Colony should have one Voice, but as this was objected to as unequal, an Entry was made on the Journals To prevent its being drawn into precedent in future.

Committees were then appointed to state American Rights, and grievances; And of the various Acts of the British Parliament which affect the Trade and Manufactures of these Colonies, on these Subjects The Committees Spent several Days, when The Congress judged it necessary….

On the 16th arrived an Express from Boston with Letters to The Delegates and the Suffolk Resolves. These were laid before the Congress and were highly approved of & applauded, as You will see, by the enclosed Paper of the 19th, in which the proceedings of the Congress, thereon, is published at large, by their Order.

A general Nonimportation of British Goods & Manufactures or of any Goods from thence, appearing to the Congress one of the means of redress in our power, and which might probably be adopted, to prevent future difficulties and altercations on this Subject among those who might Now, or for sometime past, had been sending Orders for Goods, The Congress Unanimously came into the enclosed Resolution on the 22d and the same was ordered to be published immediately. Since this Nonimportation and Non Consumption of Goods, &c from Great Britain & Ireland from & after the first of December next, has been Unanimously resolved on, but to carry so important a resolution into effect, it is necessary, that every possible precaution should Now be taken….

An Assembly like this, though it consists, of less than Sixty Members, yet coming from remote Colonies, each of which, has some modes, of transacting public Business, peculiar to itself some particular provincial rights and Interests to guard, & secure, must take some Time, to become so acquainted with each ones situations & connections, as to be able to give an united assent, to the ways & means proposed for effecting, what all are ardently desirous of…. Unanimity being in Our View of the last importance, everyone must be heard, even on those points, or Subjects which are in themselves not of the last importance And indeed it often happens that what is of little or No Consequence to one Colony, is of the last To another. We have thus hinted to Your Honor Our general Situation, which hope will Account For Our being delayed here beyond the Time which either the Colony or We ourselves expected.”

The October 14 passage of The Declaration and Resolves led to the further consideration of how to settle the grievances and still be reconciled with Great Britain. The last two weeks of October were devoted to what the Declaration of Resolves called the pursuit of “peaceable measures: 1. To enter into a non-importation, non-consumption, and non-exportation agreement or association. 2. To prepare an address to the people of Great-Britain, and a memorial to the inhabitants of British America: and 3. To prepare a loyal address to his majesty, agreeable to resolutions already entered into.”

The Association of 1774 was signed by 53 delegates on October 20 and constituted the first “peaceable measure.” Although the argument aimed at reconciliation and appealed, for the most part, to the British and colonial tradition, there were hints of the forthcoming Declaration of Independence. (Note the condemnation of slavery.)

On October 21, the delegates debated the drafts of the Address to the People of Great Britain and the Memorial to the American people. The former requested reconciliation: “place us in the same situation that we were at the close of the last war, and our former harmony will be restored.”

Jay makes the case that English Liberties apply to Colonial Americans. Thus he appeals to the rule of law rather than to natural rights. The Address begins with a reminder that their British ancestors once loved freedom, “maintained their independence and transmitted the rights of men, and the blessings of liberty to you their posterity.” We in America inherited the “essential” rights of “English Liberty” among which are trial by jury, religious liberty, habeas corpus, and that “that no power on earth has a right to take our property from us without our consent.” These rights are soon to be articulated in the State constitutions and later in the United States Bill of Rights.

Contrary to this tradition, Jay argues, Britain since 1763 has become an “advocate for slavery and oppression.” There has been a “sudden change of treatment,” and a “system of slavery which was prepared for us at the restoration of peace.” The Stamp Act receives special attention “in the catalogue of American oppressions.” Jay also claims that the British Colonies are supposed to be “free Protestant Colonies.” What we need in 1774 America, in effect, is the English 1688 Bill of Rights.

The Memorial, drafted by Richard Henry Lee, is addressed to “friends and fellow countrymen” although there is not yet an official “country” of America. And it also appeals to “Almighty God, the creator of all,” and not only to the inherited rights of Englishmen. There is a clear message that “the hostile and unjustifiable invasion of the town of Boston” is the equivalent of an invasion of a United America. He also repeats the concern about Catholic Quebec.

This Memorial repeats the claim that the King and Parliament, contrary to the English tradition of liberty have, since 1763, imposed slavery on the Colonies. Special attention is given to the Stamp Act and “The Glass, Paper and Tea Act, made fifteen months after the repeal of the Stamp Act.”

Most importantly, “humble and reasonable petitions from the Representatives of the people have been frequently treated with contempt; and Assemblies have been repeatedly and arbitrarily dissolved.” Nevertheless, “Notwithstanding the vehemence with which affairs have been impelled, they have not yet reached that fatal point. We do not incline to accelerate their motion, already alarmingly rapid; we have chosen a method of opposition, that does not preclude a hearty reconciliation with our fellow-citizens on the other side of the Atlantic.”

On October 21, Congress also resolved “That an Address be prepared to the people of Quebec.” Thomas Cushing, Richard Henry Lee, and John Dickinson, were selected to a committee to prepare the above address. These delegates are noted in the seventh column. Congress also ordered that “Joseph Galloway, Thomas McKean, John Adams and William Hooper be a committee to revise the minutes of the Congress.” See number 8. Also On October 21, John Dickinson was added to the Committee to Address the King.

On October 25, selected Richard Henry Lee and John Jay to be a committee to prepare a letter to the Agents or friends who might be able to advance the American case. See number 9.

On October 26, The Petition to the King was signed by 51 delegates. And the First Continental Congress came to an end with the possibility of meeting again in May 1775.

The Congress thus ended on a note of optimism—perhaps the various petitions and memorials might work to secure a reconciliation—and pessimism—we will probably have to meet again and try something else if the do not work. Of particular interest, is the pervasive presence of John Jay and Richard Henry Lee. Jay was in favor of reconciliation. He eventually left the Second Congress and before the signing of the Declaration. Lee was on eight of the nine committees. He introduces the Resolution in Act III to pursue independence rather than reconciliation.