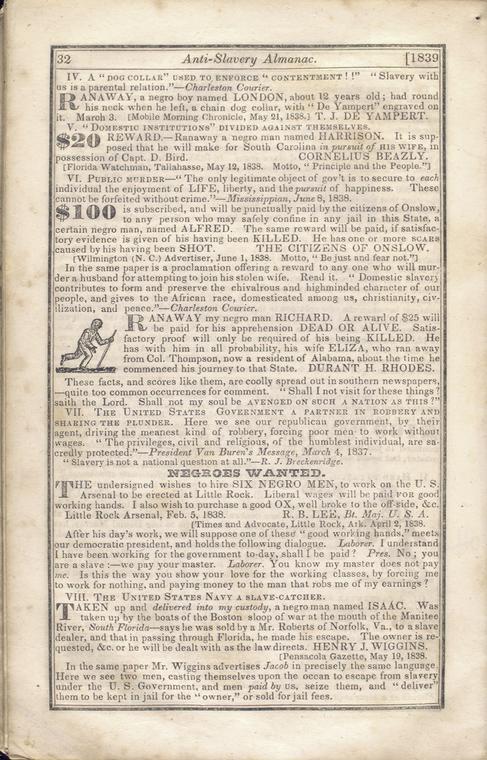 The Fugitive Slave Clause of the Constitution was the outcome of discussions and negotiations between Northern and Southern delegates, occurring from mid-July until mid-September. There are seven important dates to bear in mind when considering its adoption. On each date, a decision was made and recorded in the documents excerpted below. We list these in chronological order, under their dates.

Here is a brief history: (1) In the conversations and documents of the American Founding, the Fugitive Slave Clause first appeared in the last article in the Northwest Ordinance. That ordinance was passed on July 14, 1787. The news of the Northwest Ordinance reached the Constitutional Convention at the time the delegates were passing the Connecticut Compromise on federal representation and Congressional powers. (2) On August 6, the Committee of Detail issued its Report. There was no mention of the fugitive slave clause, but Article XV addressed what became popularly known as the Extradition Clause. (3) During the discussion of this clause on August 28, the South Carolina delegation attempted, unsuccessfully, to include “fugitive slaves” in the “fugitive” provision of the extradition clause. So (4) on August 29 that delegation came up with a separate fugitive clause that was accepted and (5) placed right under the original extradition clause in the Committee of Style Report. (On September 8, the delegates appointed a Committee of Style “to revise the style of, and arrange, the articles which have been agreed to by the House.”) (6) On September 15, the delegates agreed to a change in the language of the Fugitive Slave Clause. (7) The Constitution was signed by 39 of the 55 delegates attending the Convention on September 17, 1787.

The language and contiguous location of the Extradition Clause and the Fugitive Slave Clause in the Constitution invite the reader to compare and contrast them.

There shall be neither slavery nor involuntary servitude in the said territory, otherwise than in the punishment of crimes, whereof the party shall have been duly convicted: Provided, always, That any person escaping into the same, from whom labor or service is lawfully claimed in any one of the original States, such fugitive may be lawfully reclaimed, and conveyed to the person claiming his or her labor or service as aforesaid.

Any person charged with treason, felony or high misdemeanor in any State, who shall flee from justice, and shall be found in any other State, shall, on demand of the Executive power of the State from which he fled, be delivered up and removed to the State having jurisdiction of the offence.

(3) Madison’s Account of Debates in the  Constitutional Convention, August 28

Mr. BUTLER[1] and Mr. PINCKNEY[2] moved to require “fugitive slaves and servants to be delivered up like criminals.”

Mr. WILSON.[3] This would oblige the Executive of the State to do it at the public expense.

Mr. SHERMAN[4] saw no more propriety in the public seizing and surrendering a slave or servant than a horse.

Mr. BUTLER withdrew his proposition, in order that some particular provision might be made, apart from this article.

(4) Madison’s Account of Debates in the Constitutional Convention, August 29

Mr. BUTLER moved to insert after Article 15, “If any person bound to service or labor in any of the United States, shall escape into another State, he or she shall not be discharged from such service or labor, in consequence of any regulations subsisting in the State to which they escape, but shall be delivered up to the person justly claiming their service or labor,” — which was agreed to, nem. con.

A person charged in any State with treason, felony, or other crime, who shall flee from justice, and be found in another State, shall, on demand of the executive authority of the State from which he fled, be delivered up, and removed to the State having jurisdiction of the crime.

(6) Madison’s Account of Debates in the Constitutional Convention, September 15

Article 4, Sect. 2, (the third paragraph,) the term “legally” was struck out; and the words “under the laws thereof,” inserted after the word “State,” in compliance with the wish of some who thought the term legal equivocal, and favoring the idea that slavery was legal in a moral view.

A Person charged in any State with Treason, Felony, or other Crime, who shall flee from Justice, and be found in another State, shall on Demand of the executive Authority of the State from which he fled, be delivered up, to be removed to the State having Jurisdiction of the Crime.