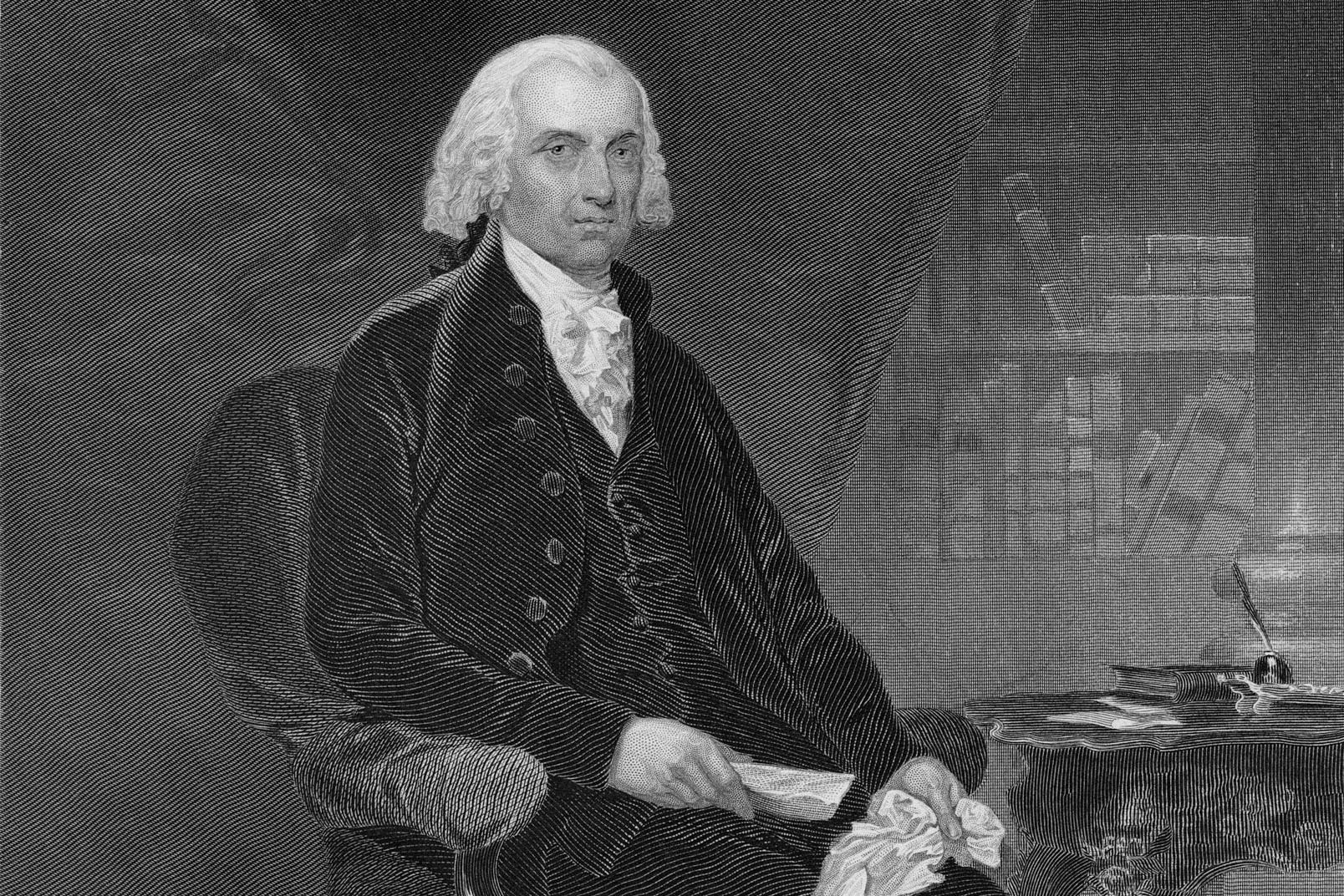 Edmund Randolph introduced the Virginia Plan as an answer to five specific defects of the Articles of Confederation that he enumerated near the beginning of his speech: 1) that it provided “no security against foreign invasion;” 2) did not empower Congress to resolve disputes between states; 3) did not empower Congress to enact beneficial commercial legislation; 4) did not protect the power of the federal government “against encroachments from the states;” and (5) that it was not regarded as the “paramount” authority, superior to the states’ own constitutions.

OUR BEST SOURCE FOR THE VIRGINIA PLAN IS THAT PROVIDED BY JAMES MADISON, WHO THROUGHOUT THE CONVENTION TOOK NOTES WHICH HE NIGHTLY ELABORATED IN A JOURNAL. THESE NOTES WERE FIRST PUBLISHED IN 1840, IN AN EDITION EDITED BY HENRY GILPIN. THE VERSION OF THE VIRGINIA PLAN REPRINTED HERE IS TAKEN FROM GORDON LLOYD, ED., DEBATES IN THE FEDERAL CONVENTION OF 1787 BY JAMES MADISON, A MEMBER (ASHLAND, OHIO: ASHBROOK CENTER, 2014), 6-10.

Mr. Randolph expressed his regret, that it should fall to him, rather than those who were of longer standing in life and political experience, to open the great subject of their mission. But as the Convention had originated from Virginia, and his colleagues supposed that some proposition was expected from them, they had imposed this task on him.

He then commented on the difficulty of the crisis, and the necessity of preventing the fulfilment of the prophecies of the American downfall.

He observed, that, in revising the federal system we ought to inquire, first, into the properties which such a government ought to possess; secondly, the defects of the Confederation; thirdly, the danger of our situation; and fourthly, the remedy.

He then proceeded to enumerate the defects:

First, that the Confederation produced no security against foreign invasion; Congress not being permitted to prevent a war, nor to support it by their own authority. Of this he cited many examples; most of which tended to show, that they could not cause infractions of treaties, or of the law of nations, to be punished; that particular States might by their conduct provoke war without control; and that, neither militia nor drafts being fit for defense on such occasions, enlistments only could be successful, and these could not be executed without money.

Secondly, that the Federal Government could not check the quarrel between States, nor a rebellion in any, not having constitutional power nor means to interpose according to the exigency.

Thirdly, that there were many advantages which the United States might acquire, which were not attainable under the Confederation — such as a productive impost — counteraction of the commercial regulations of other nations — pushing of commerce ad libitum,[1] &c. &c.

Fourthly, that the Federal Government could not defend itself against encroachments from the States.

Fifthly, that it was not even paramount to the State Constitutions, ratified as it was in many of the States.

He proposed, as conformable to his ideas, the following resolutions, which he explained one by one.

“1. Resolved, that the Articles of Confederation ought to be so corrected and enlarged as to accomplish the objects proposed by their institution; namely, “common defense, security of liberty, and general welfare.”

“2. Resolved, therefore, that the rights of suffrage in the National Legislature ought to be proportioned to the quotas of contribution, or to the number of free inhabitants, as the one or the other rule may seem best in different cases.

“3. Resolved, that the National Legislature ought to consist of two branches.

“4. Resolved, that the members of the first branch of the National Legislature ought to be elected by the people of the several States every — for the term of —; to be of the age of — years at least; to receive liberal stipends by which they may be compensated for the devotion of their time to the public service; to be ineligible to any office established by a particular State, or under the authority of the United States, except those peculiarly belonging to the functions of the first branch, during the term of service, and for the space of — after its expiration; to be incapable of reelection for the space of — after the expiration of their term of service, and to be subject to recall.

“5. Resolved, that the members of the second branch of the National Legislature ought to be elected by those of the first, out of a proper number of persons nominated by the individual Legislatures, to be of the age of — years at least; to hold their offices for a term sufficient to insure their independency; to receive liberal stipends, by which they may be compensated for the devotion of their time to the public service; and to be ineligible to any office established by a particular State, or under the authority of the United States, except those peculiarly belonging to the functions of the second branch, during the term of service, and for the space of — after the expiration thereof.

“6. Resolved, that each branch ought to possess the right of originating acts; that the National Legislature ought to be empowered to enjoy the legislative rights vested in Congress by the Confederation, and moreover to legislate in all cases to which the separate States are incompetent, or in which the harmony of the United States may be interrupted by the exercise of individual legislation; to negative all laws passed by the several States contravening, in the opinion of the National Legislature, the Articles of Union, or any treaty subsisting under the authority of the Union; and to call forth the force of the Union against any member of the Union failing to fulfil its duty under the Articles thereof.

“7. Resolved, that a National Executive be instituted; to be chosen by the National Legislature for the term of —; to receive punctually, at stated times, a fixed compensation for the services rendered, in which no increase nor diminution shall be made, so as to affect the magistracy existing at the time of increase or diminution; and to be ineligible a second time; and that, besides a general authority to execute the national laws, it ought to enjoy the executive rights vested in Congress by the Confederation.

“8. Resolved, that the Executive, and a convenient number of the national Judiciary, ought to compose a Council of Revision, with authority to examine every act of the National Legislature, before it shall operate, and every act of a particular Legislature before a negative thereon shall be final; and that the dissent of the said council shall amount to a rejection, unless the act of the National Legislature be again passed, or that of a particular Legislature be again negatived by — of the members of each branch.

“9. Resolved, that a National Judiciary be established; to consist of one or more supreme tribunals, and of inferior tribunals to be chosen by the National Legislature; to hold their offices during good behavior, and to receive punctually, at stated times, fixed compensation for their services, in which no increase or diminution shall be made, so as to affect the persons actually in office at the time of such increase or diminution. That the jurisdiction of the inferior tribunals shall be to hear and determine, in the first instance, and of the supreme tribunal to hear and determine, in the dernier[2] resort, all piracies and felonies on the high seas; captures from an enemy; cases in which foreigners, or citizens of other States, applying to such jurisdictions, may be interested; or which respect the collection of the national revenue; impeachments of any national officers, and questions which may involve the national peace and harmony.

“10. Resolved, that provision ought to be made for the admission of States lawfully arising within the limits of the United States, whether from a voluntary junction of government and territory, or otherwise, with the consent of a number of voices in the National Legislature less than the whole.

“11. Resolved, that a republican government, and the territory of each State, except in the instance of a voluntary junction of government and territory, ought to be guaranteed by the United States to each State.

“12. Resolved, that provision ought to be made for the continuance of Congress and their authorities and privileges, until a given day after the reform of the Articles of Union shall be adopted, and for the completion of all their engagements.

“13. Resolved, that provision ought to be made for the amendment of the Articles of Union, whensoever it shall seem necessary; and that the assent of the National Legislature ought not to be required thereto.

“14. Resolved, that the legislative, executive, and judiciary powers, within the several States ought to be bound by oath to support the Articles of Union.

“15. Resolved, that the amendments which shall be offered to the Confederation, by the Convention, ought, at a proper time or times, after the approbation of Congress, to be submitted to an assembly or assemblies of representatives, recommended by the several Legislatures, to be expressly chosen by the people to consider and decide thereon.”

He concluded with an exhortation, not to suffer the present opportunity of establishing general peace, harmony, happiness and liberty in the United States to pass away unimproved.

It was then resolved, that the House will tomorrow resolve itself into a Committee of the Whole House, to consider of the state of the American Union; and that the propositions moved by Mr. Randolph be referred to the said committee. . . .

A. Do the states have any significant role under the Virginia Plan? The Virginia Plan on the one hand seems to place principle responsibility for governing in the national legislature; but at the same time, the proposed Council of Revision seems to tilt the balance of power toward the executive and the judiciary. Is there a tension at the heart of the Virginia Plan?

B. In what way is the Virginia Plan a radical departure from the Articles of Confederation? How is its vision of republicanism similar to, or different from, earlier and later statements of representative government? Compare it to the Virginia Declaration of Rights and Constitution, the New Jersey Plan, the Hamilton Plan and Madison’s account of representative government in Federalist 10.