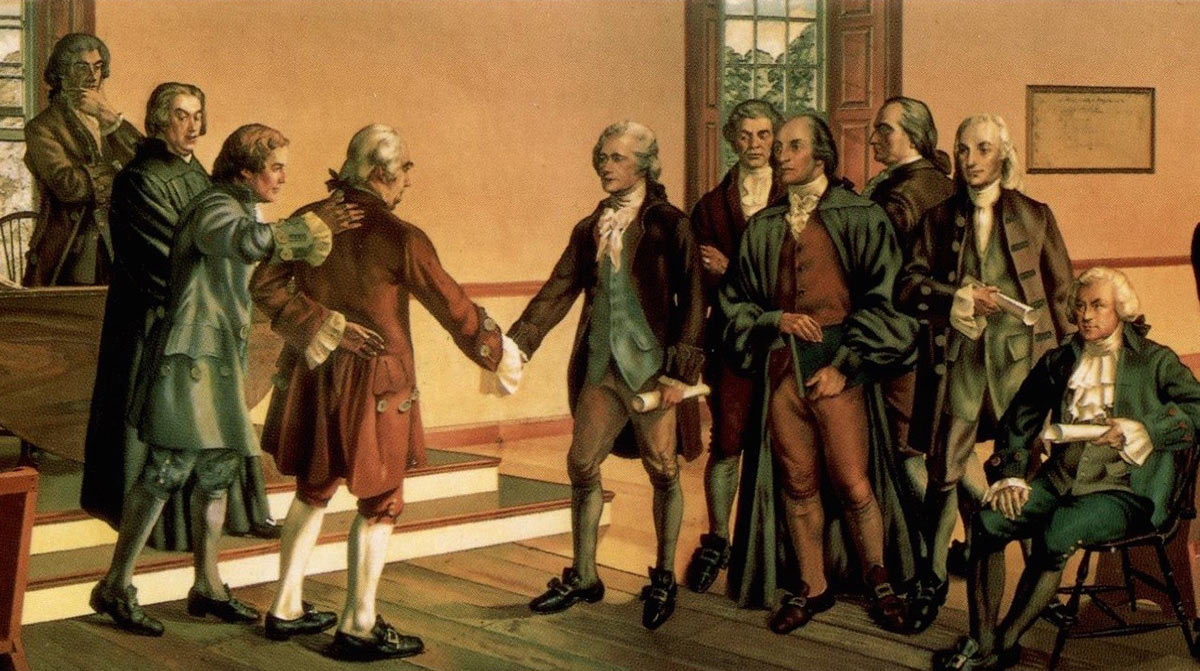 My hope is that scholars, teachers, high school students, and, particularly, the concerned citizen can have access to a story of the American Founding—not just a document here, a document there—but a story. Here, they can enter the story through the Declaration of Independence and they can see the closing of the story with the Bill of Rights. In between, they can see the creation of the Constitution and the ratification of that Constitution in state conventions as well as the public debate between Publius and the Anti-Federalists.

It’s been a wonderful fifteen years of work. I mean, I’d love to be there—there in ’76, or there at the Convention—and I’d like people to feel as if they’re there—in the story.

When people think of America’s Founding, I want them to think of Ashbrook.

We have divided the story of the American Founding into four chapters: Chapter One is The Case for Independence, Chapter Two is The Constitutional Convention, Chapter Three is Debate and Ratification both in doors—Ratifying Conventions—and out of doors—The Federalist-Antifederalist Debates, and Chapter Four is The Bill of Rights.

The site is guided by the Benjamin Franklin Rising Sun Chair speech, and each chapter is guided by a quote from a different Founder.

What do you have in each chapter? Is it a narrative of each part of the story?

A visitor to the site will see “Chapters” right at the top of the screen. If they click on it they will then be able to choose which of the four chapters they would like to view. Each chapter, in terms of the commentary we use to guide the reader, is divided into various Acts, Dramas, Scenes, Sections, or Dimensions. These, along with a number of additional resources that we authored, can be found under the “Article” tab of each chapter.

You said that original documents are important, where do they come in?

I am glad you asked! Each chapter also has a “Document” tab. In this section of the chapter the visitor can find all of the original documents that are relevant for the chapter. These are so important. These are the words of the Founders. When you come to them with an open mind, seeking to understand Founders on their terms, you can really see that the story of the Founding is a story of hope.

The chapters that you laid out each cover a significant amount of time or a period of time in which a lot is happening. How can a reader keep it all straight?

You are absolutely right! The chapters for the Declaration, Constitution, and Ratification are exactly as you describe. What we did was to create a Calendar or Timeline for each of these chapters that allow the reader to easily navigate the Journals of the Continental Congress, Madison’s Debates in the Federal Convention, and the Federalist-Antifederalist Debates respectively.

You say it has been 15 years of work, how did you come to study the American Founding?

Well, I knew nothing about the American Founding growing up because I grew up in Trinidad. There, it was West Indian culture and European. However, what I knew about America was jazz. That, and the Voice of America.

I came to the University of Chicago as a 21 year-old graduate student to study with Milton Freidman in the economics department. I was disappointed to find out that what I thought was economics was now watered-down statistics and watered-down second derivatives.

I wanted a story—an economic one. I wanted a story that discussed the poverty and wealth of a society. And so I came across this book written by Charles Beard and published in 1913. Even in the 1960s, this book was still a big hit. It was called An Economic Interpretation of the Constitution.

I was so excited! I’m finally going to get an interesting story about political economy in America! So, I read it. All you need to know about the U.S. Constitution, says Beard, is to answer the question of who wrote it. What kind of wealth did they have? You really don’t need to bother understanding the language of the Constitution or the debates about its contents.

My first entry in studying the American Founding was through Charles Beard and I became his critic. Just because you know the wealth holdings of a person does not mean you understand the substance of the debate and the arguments they made. There’s no debate in Beard which is odd because debate is everywhere in the Founding. So, I decided that I would actually rather read those debates themselves.

I was very, very fortunate because I decided that economics was not my path. But this book stuck in my mind. I knew of two people at Claremont Graduate School who were very interested in the debates and discussions of the Founding, Martin Diamond and Douglass Adair. Martin’s approach was primarily thorough The Federalist Papers, so I started reading those and my interest in the Founding grew. And so I continued to this day despite that fact that in all of my academic training, I’ve still never taken a single course on the American Founding! I love approaching it in an original way.

By the time I started teaching, I did teach economics, but I was always interested in the Founding.

Is discussion still relevant? Is debate still relevant? Can we imagine politics as deliberation rather than war? It is still relevant because people still speak, write, and discuss. You must realize the world is not simply war; nor is it simply an impossible dream we blindly pursue. There’s a real world that the Founders teach us about and it’s slogging. It’s slogging, but you’re still standing for your position, but realizing you’re representing people. That’s what’s important.

I love that painting of the New York Ratifying Convention. New York was divided from the very beginning—over the Declaration of Independence and through to the question of whether to ratify the new Constitution. The New York convention was the Federalist and the Anti-Federalists playing out in real time. And in there in the painting, Hamilton (Publius), Clinton, (Cato), and Melancton Smith (Brutus) are shaking hands at the end of the convention. Is that relevant? You’re darn right is.

Now, I know one of your favorite moments of the Constitutional Convention is at the end when the document itself is being signed and Benjamin Franklin makes an observation. Do you want to explain that a bit?

Certainly! In his record of the Convention, James Madison notes that while “the last members were signing it Doct FRANKLIN looking towards the Presidents Chair, at the back of which a rising sun happened to be painted, observed to a few members near him, that Painters had found it difficult to distinguish in their art a rising from a setting sun. I have said he, often and often in the course of the Session, and the vicissitudes of my hopes and fears as to its issue, looked at that behind the President without being able to tell whether it was rising or setting: But now at length I have the happiness to know that it is a rising and not a setting Sun.”

When I came to America, I was full of hope and optimism—here was an opportunity. Not only that, the world looked to America; Voice of America, Jazz Hour, films, books….I could go on! America was a land of hope. At age 21, I arrived with two suitcases and knew nobody. It’s truly a land of opportunity.

What struck me was the self-doubt that Americans had. I never had a doubt about America. Americans—and this really shocked me—have all this hope and opportunity here and a lot of them are miserable or pessimistic.

And it continues today. There’s a strain within America that does not see America or its founding as good. In this view, if you don’t have a good founding, how can you teach your young that their country is good? How can you have hope?

The challenge today is this idea that an ugly founding cannot produce citizens who love their country. But it’s not so simple. Of course you can’t simply have blind patriotism, but rather an intelligent patriotism—an informed patriotism. You need to do the work and read their words.

When I read Lincoln, when I read FDR, and I read Reagan, there’s a theme which all three strike: America is the last, best hope for mankind. 1860s, 1930s, and the 1980s: a central theme is present about the goodness of America, and a lot of Americans doubt that. There are many more examples, but these three presidents understand the hope that America represents. I think they’re correct.

Unfortunately, there are many people who see politics as war. They think it’s right to teach our youth how to dislike their country before they teach the “ABCs” of their country. Then, when they’re older they can draw their own distinctions and conclusions. But the fundamentals must come first.

How many young people know the separation of powers? You have to know the basics before you can get into the greater questions; but, if you start off with the understanding that America is not a land of hope, but rather a disgusting place, then there is no hope. It’s not a lie—America is a land of hope! But there are people who doubt that. And each of these questions turn on how you understand the founding. Moreover, when do you place the founding? Is it 1619? Is it 1776? Where you start the story has a great impact on answering the question of hope.

What does it mean to you to see this website come together?

I didn’t flee Trinidad like he fled Hungary. Our starting points were slightly different. He and his family were fleeing for their lives, and I wasn’t. I was coming to be educated. But we both came here with hope. Both of us shook our heads at the way some Americans dislike their country. I would like to consider myself continuing in this spirit; the spirit of Peter Schramm, a founder in his own right.