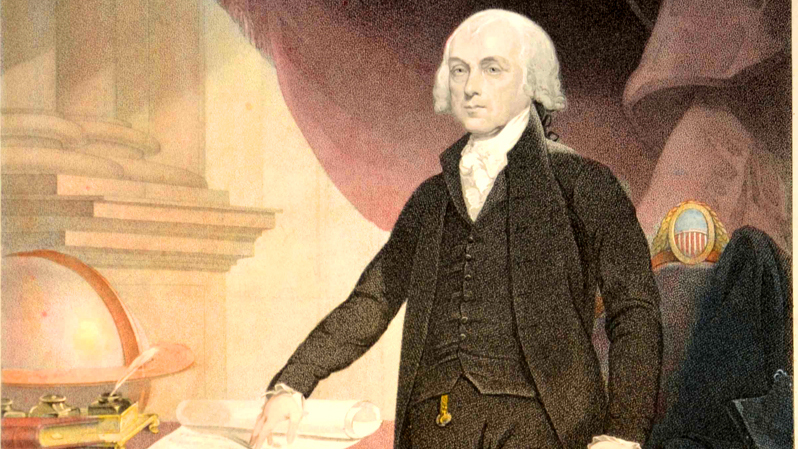 This op-ed was nationally syndicated and has been published in dozens of newspapers.

March 16 was the birthday of a little man who made a huge impact on America. At 5’4” and not much over 100 pounds, James Madison—our fourth President (1809-1817)—was the smallest of America’s Founders. But he was a Constitutional giant.

Madison didn’t write the Constitution single-handedly; it was the product of argument and compromise among those who attended the 1787 Constitutional Convention in Philadelphia. But of all the Founders, Madison was most responsible not only for the Constitution itself, but also for the Bill of Rights that followed. That’s why he is fairly called “The Father of the Constitution.”

These days, however, Madison’s progeny is under attack. Critics denounce the Constitution as anti-democratic, pro-slavery, outdated and in desperate need of amendments on many issues, such as the Electoral College.

None of these criticisms would surprise Madison; he heard them in his own day. In response to Anti-Federalists who argued in 1787 that the Constitution did not create a democracy, Madison reminded them in The Federalist no. 10 that the goal was to establish a constitutional republic in which the people govern through the deliberation of representatives and the rule of law, not through instant public opinion, passion, or the mob.

In response to those who claimed the Constitution was pro-slavery, Madison argued in The Federalist no. 42 that critics should not “pervert” the text into saying something it doesn’t. The words of the Constitution were a compromise on slavery that nevertheless “ought to be considered as a great point in favor of humanity” because they left open the eventual abolition of the “unnatural traffic” of slave trade and “the illicit practice” of slavery itself. Madison’s argument was later taken up by opponents of slavery, including Abraham Lincoln and the great Black abolitionist Frederick Douglass.

In defending the Constitution, Madison knew it wasn’t perfect. That’s one reason he offered what are now the first 10 amendments: the Bill of Rights. It’s also the reason we have important amendments like those abolishing slavery and extending the right to vote. The Constitution can be improved.

But before we replace or radically alter Madison’s Constitution, we need to remember how fortunate we are. It’s hard to have and keep a constitution that promotes stable government, protects individual freedom, and secures the rule of law. Lots of other countries have tried and failed.

To preserve what is good in the Constitution, Madison knew, as he said in The Federalist no. 49, that the document must continue to have “that veneration … without which the wisest and freest governments would not possess the requisite stability.” In other words, the key to the Constitution’s continuing success is not just its words, but the impact those words have on the hearts and minds of the American people.

“We the People” need to be a constitutional people who understand why the Constitution says what it says. If we don’t, as Madison understood, our experiment in self-government will fail and we will lose the “Blessings of Liberty” the Constitution proclaims.

Sadly, survey after survey shows that too many Americans, especially younger Americans, have neither the knowledge of, nor the devotion to the Constitution that Madison called for. It’s a serious crisis.

Every year, crowds of Americans visit national monuments to George Washington, Thomas Jefferson, Abraham Lincoln and Martin Luther King, Jr. And rightfully so. But there is no such monument to James Madison.

His monument is the Constitution. The better you know it, the more inclined you will be to preserve it.