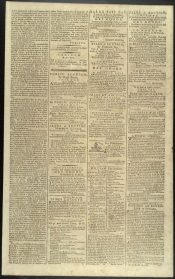 The Federalist-Antifederalist Debates surrounding the ratification of the Constitution took place over a period of about a year, and across the states. The Federalists, in the strictest terms, consisted of Hamilton, Jay, and Madison, and those who agreed with the case they made over the course of The Federalist. The Antifederalist side is more difficult to define, given that the authors of the many editorials and addresses written against the Constitution did not coordinate with one another, took issue with the document for different reasons, and offered different solutions. That is, the Antifederalists were not a single, coherent group, promoting a clear set of ideas.

Rather, the Antifederalists presented and argued a variety of concerns about the purpose, structure, and powers of the proposed government. In so doing they addressed many of the same issues that the Federalists discussed, albeit from a very different perspective. The following list of pairings connects a single Essential Federalist with an Essential Antifederalist, connecting them through an issue addressed in both papers. This is not to suggest that the authors wrote in response to one another, or that these pairings should be taken as opposite sides of the same issue. Rather, these pairings provide the opportunity to consider the prevailing views of the two sides on particular issues, many of which concern questions still relevant today.