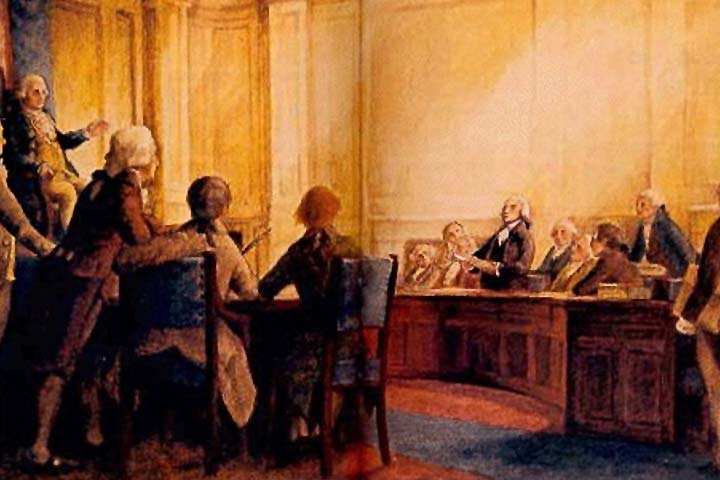 With the unconditional adoption of the Constitution, newly elected Representative James Madison urged the First Congress to reject amendments that would radically change the Constitution along the lines suggested by Massachusetts and New Hampshire and adopt a bill of rights as suggested by Virginia and New York. President George Washington had earlier set the tone in his First Inaugural Address: he urged a reverence be shown toward “the characteristic rights of freemen.” Madison declared that he had always been in favor of a bill of rights. He argued that enumerating rights was not dangerous if there were a stipulation that the list “shall not be construed to deny or disparage others retained by the people.” This is the reasoning undergirding what became the Ninth Amendment in the U.S. Bill of Rights. And for prudential reasons a bill of rights was necessary to conciliate “honorable and patriotic opponents.” Furthermore, a bill of rights, although impotent to stop a tyrannical majority, would be valuable in the event that elected officials overstepped their bounds, and a bill of rights could perform a civic educational function by reminding Americans of the purposes and limits of government. And he did this in front of an unenthusiastic Congress dominated by Federalists. Only 13/59 House members were Antifederalist (four from Virginia) and 2/13 (both from Virginia) in the Senate.

Crucial to Madison’s approach was the distinction between friendly alterations such as a bill of rights that would limit the reach of both the federal and, if Madison had his way, state governments on the one hand, AND unfriendly alterations such as amendments that would alter the structure and power of the new federal government. Moreover, he wanted the first session of the Congress to complete this project thus stifling any further attempt to call for a Second Convention.

Madison recommended that the representatives open up the Constitution and insert specific rights limiting the power of Congress in Article I, Section 9. Seven of these limitations became part of the 10 amendments adopted by the state legislatures in 1791. He also suggested the inclusion of the following in Article I, Section 10: “No State shall violate the equal right of conscience, freedom of the press, or trial by jury.” This would test the sincerity of the claim that “every government,” as Jefferson mentioned to Madison in the correspondence over the Bill of Rights, should be limited by a bill of rights.

The Senate, in turn, reduced the number to 12, excluding in the process Madison’s three restrictions on state governments. A House-Senate Conference Committee reconciled the remaining differences and Congress finally submitted 12 amendments to the states for ratification on September 25, 1789. The first two were rejected and the last ten were approved. With the exception of the numerous changes made to the religion clauses during the three-month process from the June 8 speech of Madison to the Congressional signing of the Bill of Rights in September 1789, the deliberations indicated what Madison would later call “the deliberate sense of the community.”

Dimension I: Madison’s Proposals for a Bill of Rights

(Read commentary on Dimension I)