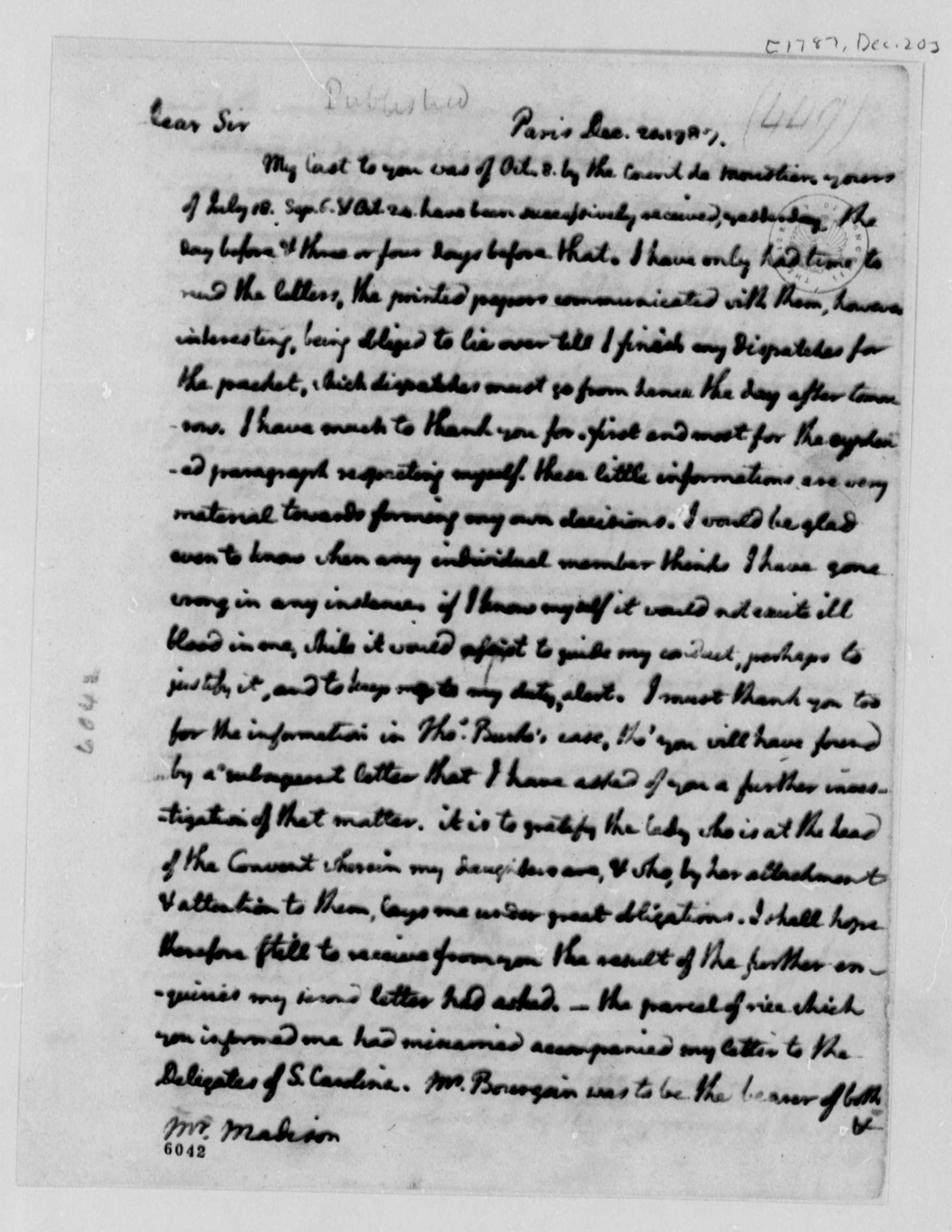 INTRODUCTION TO THE SELECTED CORRESPONDENCE

The delegates to the Constitutional Convention in Philadelphia adopted a rule of secrecy right at the start of their deliberations. Writing from Paris to John Adams in London, Jefferson says: “I am sorry they began their deliberations by so abominable a precedent as that of tying up the tongues of their members. Nothing can justify this example but the innocence of their intentions, and ignorance of the value of public discussions. I have no doubt that all their other measures will be good and wise.” This comes after he has declared the delegates to be “an assembly of demigods.” The adoption of the secrecy rule also means, to the extent that it was observed—and it was pretty scrupulously observed—that subsequent generations of scholars have limited access to the private thoughts of the delegates during the time the deliberations were taking place. There are numerous post convention observations and reflections by the delegates, but these are not quite the same as an unfolding authentic observation.

What follows, then, is a list of essential correspondence. My criterion for essential is that they were written by people who played an essential part in the drama of the American Founding and that the letters reveal some of the twists and turns along with the initial hopes, the frustration during the middle months, the homesickness of the delegates, and the relief that it was all over. I have selected those letters that give a personal flavor to my coverage of the Constitutional Convention as a Four Act Drama. To be sure, there are other letters that could have been included, but they repeat the same twists and turns and the missing of the “felicity” of family life etc that have already been essentially included.

The fact that some of the delegates left Philadelphia—especially the New Jersey and Delaware delegates—for certain periods of time and exchanged comments with those still in Philadelphia provides some valuable information. They talked as openly and as frankly with each other in the mail as they would have done on the floor of the convention. The exchange in early July between Hamilton and Washington is particularly noteworthy in this regard. Also of interest is the correspondence that delegates received from concerned and influential folks back home who shared what they heard being “whispered” about the proceedings. Nor were people like John Jay and Nathan Dane reluctant to provide their own opinions to the selected delegates. And despite his protestations about how the secrecy rule demonstrated “an ignorance of the value of public discussions,” Jefferson was kept informed by Madison of the general flow of the debates and, in turn, he openly exchanged ideas with Madison about the separation of powers and the construction of the executive branch.

May 15. James Madison to Thomas Jefferson. “There is less punctuality in the outset than was to be wished.”

May 15. Richard Henry Lee to George Mason. “I fear it is more in vicious manners, than in mistakes in form, that we seek for the causes of the present discontent.”

May 20. George Mason to George Mason Jr. How the Virginia delegates occupied themselves in Philadelphia waiting for a quorum of states to take place.

May 20. George Washington to Arthur Lee. The general is livid at the absence of a quorum: “the delays…sour the temper of the punctual members.”

May 21. George Read to John Dickinson. Housing is at a premium and the Virginians have a plan.

May 21. George Mason to Arthur Lee. “The most prevalent Idea, I think at present, is a total Change in our Federal system.”

May 23. James Monroe to James Madison. “We all look with great anxiety to the result of the Convention at Philadelphia.”

May 27. James Madison to Edmund Pendleton. Finally, we have a quorum.

May 27. George Mason to George Mason Jr. “It is impossible to judge how long we shall be detained here, but from present appearances I fear until July, if not later.”

June 1. Robert Yates to Abraham Yates. He doesn’t like the secrecy rule, but will obey it and keep “an exact journal.”

June 3. Nathaniel Gorham to Nathan Dane. He is not supposed to tell what the delegates are doing, “but to you in confidence I can say” what has been agreed to.

June 3. Jeremiah Wadsworth to Rufus King. On Connecticut delegate Roger Sherman: “he is as cunning as the devil.”

June 6. Edmund Randolph to Beverley Randolph. The former decides to send for his wife because the delegates will be in Philadelphia for a long time.

June 6. James Madison to Thomas Jefferson. He is restrained by rules of confidentiality, but what we do here “will in some way or other have a powerful effect on our destiny.”

June 6. James Madison to William Short. “The convention contains in several instances the most respectable characters” and “the eyes and hopes of all are turned towards this new assembly.”

June 15. John Dickinson to Polly Dickinson. The “convention is very busy,” and “of an excellent temper.”

June 18. Nathaniel Gorham to Theophilus Parsons. He is not supposed to say anything, but here is what we are doing. “I beg you not to have heard anything on the subject from me, except to your brother.”

June 19. Nathan Dane to Rufus King. Delegate Pierce Butler from Philadelphia is in New York visiting his wife and attending Congress; he doesn’t “fully understand the true meaning, full and just extent of the order not to communicate.”

June 20. Thomas Jefferson to James Madison. “The negative proposed to be given them [Congress] on all the acts of the several legislatures is now for the first time suggested to my mind. Prima facie I do not like it.”

June 26. Oliver Ellsworth to Abigail Ellsworth. He longs for the sincerity of the “little domestic circle.”

June 26. John Lansing to Philip Schuyler. “The business of the Convention is going along very slowly.”

June 27. William Pierce to George Tucker. “We are enjoined in secrecy. I dare not say any thing.”

June 30. George Mason to Beverley Randolph. Silence forbids giving information, but the next two or three days are decisive.

July 1. George Washington to David Stuart. “Everybody expects something from the convention.” He anticipates opposition from local politicians unwilling to lose their current powers in state government.

July 2. William Paterson to Euphemia Paterson. “Much remains to be done, and the work is full of labour and difficulty.”

July 3. Alexander Hamilton to George Washington. The people are ready for a “strong well mounted government.”

July 7. William Jackson to William Rawle. He thanks Rawle for extending the library privileges of the Library of Philadelphia to the delegates.

July 10. George Washington to Alexander Hamilton. He despairs of “seeing a favourable issue to the proceedings of the Convention, and do therefore repent having had any agency in the business.”

July 18. James Madison to Thomas Jefferson. The Antifederalists are already mounting their out of doors pamphlet opposition to the new plan. Essays by A Mechanic and Columbiadis have appeared.

July 25. William Pierce to William Short: The “first principles” have been settled.

July 25. Edmund Randolph to David Shepherd. “A committee was appointed to prepare a constitution conformable to those (general) principles” that have been agreed on.

July 25. John Jay to George Washington. Only a natural born citizen should be President.

August 12. Richard Dobbs Spaight to James Iredell. The Committee of Detail Report is under consideration. He anticipates opposition by local politicians during ratification.

August 14. Thomas Jefferson to George Washington. Americans are “in the happiest political situation which exists.”

August 16. Thomas McKean to William Atlee. The convention is still sitting; “some say, they will continue together about two more weeks, others say two months.”

August 19. George Washington to Henry Knox. “I am fully persuaded it is the best that can be obtained at the present moment under such diversity of ideas as prevail.”

August 21. Elbridge Gerry to Ann Gerry. “We meet now at ten and sit till after four, but entre-nous, I do not expect to give my voice to the measures.”

August 23. William Paterson to Oliver Ellsworth. “It is said that you are afraid of the very windows, and have a man planted under them to prevent the secrets and doings from flying out.”

August 26. Elbridge Gerry to Ann Gerry. “I am exceedingly distressed at the proceedings of the Convention.”

August 28. Alexander Hamilton to Rufus King. He will return to sign. It is “whispered here” that the Constitution has recently taken on a “higher tone.”

August 30. Thomas Jefferson to John Adams. “It is really an assembly of demigods.” However they were wrong to adopt a rule of secrecy.

September 1. William Johnson to Ann Johnson. He expects to be home in a fortnight.

September 6. James Madison to Thomas Jefferson. “If the present moment be lost, it is hard to say what may be our fate.”

September 7. Jonas Phillips to George Washington. Urges departure from state practices that require an oath to the New Testament as a qualification for holding office.

September 9. Elbridge Gerry to Ann Gerry. “I have every prospect at present of my giving my negative.”

September 9. George Washington to George Augustine Washington. “I am homesick.”

September 13. Joseph Jones to James Madison. “it is whispered here that the Virginia delegation is less than unanimous” on the mode of ratification.

September 15. John Dickinson to George Read. Due to a severe headache, “I am now setting off for Wilmington.” (Read signed Dickenson’s name to the Constitution.)

September 16. James McHenry to Peggy McHenry. “The plan of government passed by an unanimous vote.” I am coming home.